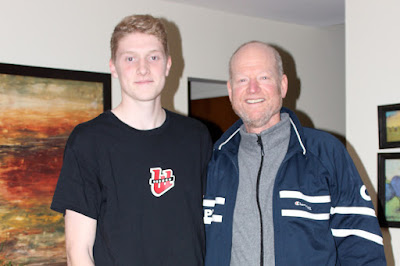 The University of Winnipeg Men's Volleyball program is already preparing for the future. Men's Volleyball head coach Larry McKay is pleased to announce that Ethan Duncan has committed to the Wesmen Men's Volleyball team for the start of the 2016-2017 Canada West season next September.

Duncan a 6-6 outside hitter from Westwood Collegiate was named a West Winnipeg Athletic Conference All-Star in 2013 and 2015. This past September he was named an All-Star at the University of Winnipeg Varsity Boys' Volleyball Tournament.

"Ethan is a good athlete with size in the outside hitting position. He has the potential to be a strong player in our league. Having played multiple sports previous to pursuing volleyball in the last year gives Ethan an expanded set of athletic skills in addition to his height", said Wesmen Men's Volleyball head coach Larry McKay.

Duncan has played volleyball for the past seven years and recently was a member of the Junior Bison's Club Team that qualified for the National Championships earlier this year. The team was coached by Wesmen Alumnus Cam Johnson. He has been awarded Male Athlete of the Year for six years in a row from Lincoln Middle School and Westwood Collegiate.

"Ethan is a very special athlete who excels in multiple sports. He has focused on volleyball for less than a year and has quickly established himself as one of the top attackers in the province. He has a tremendous upside and an intense desire to learn. The Westwood community is proud of him and excited to follow his career as a Wesmen", added Westwood Collegiate Varsity Boy's Volleyball head coach Brian Schmeichel.

Ethan has received many MVP awards aside from volleyball including basketball and ultimate.  He has excelled at ultimate for seven years and has participated in two Canadian High School Ultimate Championships. He has been a member of the Provincial Ultimate Team for three years and was recently invited to try out for the U20 Jr. National Ultimate Team for a spot on Team Canada for the World Juniors taking place in Poland next summer.

Duncan joins the impressive list of Westwood Collegiate Alumni who have worn a Wesmen uniform including current volleyball players Ryan Bisognano and Sonia Rossy.  Joey Vickery, Mark Johanson,  Gord Tucker and Will Parker to name a few played on the Wesmen Men's Basketball teams. Bruce Rannard was a member of the Men's Volleyball program and Leanne Toews is a past member of the Women's Volleyball Program.
at November 19, 2015