A pandemic can’t stop the music at Westwood Collegiate.

Through lockdowns and social distancing, masks and rounds of hand sanitizer, the collegiate’s six bands have played on — and now, they’re reaping the rewards.

Edwards said he’d never experienced a clean sweep at the provincial festival in his 27 years of teaching.

"We were just beaming," he said. "I can’t even comprehend it."

Normally, over 200 bands would enter in the Manitoban contest. This year, Westwood Collegiate covered six of 11 submissions — and, they were the only groups to enter with wind instruments.

Edwards and his students had to be creative and nimble to continue playing.

"There was always this Plan A, B, C type thing that Mr. Edwards had," said Brooke Schrader, a Grade 11 student in three of Edwards’s bands.

It wasn’t a question of whether or not to play — it was more where and how, according to Schrader.

The !rst day students were able to practise in school, Edwards had taped squares in the band room for kids to stand in, Schrader said. He ordered custom-made masks for woodwind and brass players.

The students muted their microphones and played their instruments to a song recording from Edwards’s end. The intermediate and senior jazz groups would gather on video chat at 7:20 a.m. in the !rst round of home studies — to match the time of their in-person class — and tried to keep it quiet. After all, family members were sleeping. 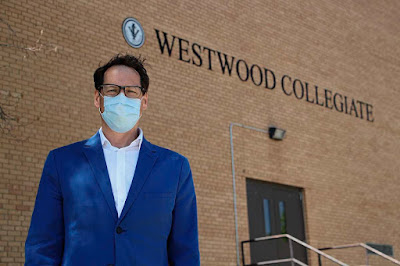 Greg Edwards, Westwood Collegiate's band teacher, has been an educator for 27 years. He said it's the !rst time he's ever seen the Manitoba Band Association put on an awards ceremony for a school. (GABRIELLE PICHÉ/CANSTAR COMMUNITY NEWS/HEADLINER)

Schrader would use the stick-ends of her mallets to hit instrument keys while on morning calls at home in Headingley. She also put towels in the bottom of her conga drums to mu"e the noise.

Band members made personal YouTube channels for class. They’d record themselves playing their instruments, upload the videos and send links to Edwards, who would grade them and give them feedback based on what he saw and heard.

There was a window in May where kids were back in class and could play music. However, only 25 students could be together in a room at once.

Edwards and his crew jumped on the opportunity. The concert bands had to split into two groups; while they played, they listened to recordings of the missing instruments. After a few rehearsals, the bands recorded their songs — festivals were taking video submissions instead of in-person performances this year.

The senior concert band couldn’t make it work. There were two recordings to meld together, as the group couldn’t play inside as one, and their videos didn’t align.

Then, members got an email: meet in the collegiate’s courtyard Monday morning.

So, around 7 a.m. on a chilly spring day (it was -1 C), the students spaced themselves, in their formal wear, and played together for the !rst time to record for nationals.

"As a percussionist, my !ngers were getting so cold that it was hard to move my hands really fast," Schrader said. "But, we sounded pretty good, so we were happy about that."

She said the awards the bands received are great, but what she really took from the experience is that hard work pays o#. She credits Edwards for making the school year better.

"When everyone else had given up, Mr. Edwards was always there, and he was working really hard to get everything done," she said.

Edwards said he’s in awe of his students.

"The English language falls short in expressing the right words to say how amazed, and proud, and supported (I feel)," he said.

The Manitoba Band Association held a virtual awards ceremony for Westwood Collegiate this year, which Edwards said is unheard of.

"Westwood just went above and beyond," she said.

Students in Edwards’s classes, including Ty Baldwin and Kellin Kilpatrick, echoed that it took resilience to keep going this year.

Gabrielle Piché is the community journalist for The Headliner. Gabby is a cub reporter fresh from Red River College’s creative communications program. She majored in journalism and spent the summer of 2020 as an intern at the Winnipeg Free Press. Gabby also has a B.A. in communications from the University of Winnipeg. She reported for newspapers in the Interlake, including the Selkirk Record, in 2019, and received the Eric and Jack Wells Excellence in Journalism award in 2020. When she’s not chasing stories, you can !nd Gabby listening to podcasts, attempting yoga or petting somebody’s dog Email her at gabrielle.piche@canstarnews.com