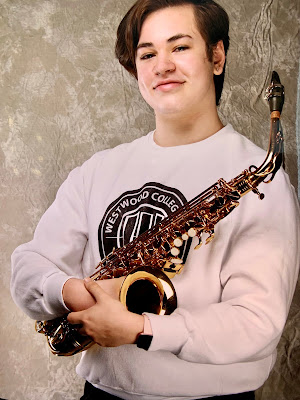 It is with great pleasure and joy that we acknowledge Chase as the March Artist of the Month for his outstanding contributions in the Band and Jazz Band program. Chase has been a member of the band program for the past three years and has demonstrated his awesomeness time and time again through his wonderful alto saxophone playing.  This past year, Chase has won several solos and has consistently delivered a very musical performance.  In addition, to his concert band playing, Chase took the leap this year and joined jazz band.  It has been a great pleasure to watch him fall in love with this new genre of music and new style of playing.

For those of you who do not know Chase, he is an intelligent young man who consistently brightens every room he enters.  He has a wonderfully infections smile that automatically makes those around him feel welcome and valued.  In addition to his accomplishments in the band program you can catch Chase as an integral part of the Dance Program here at Westwood where he consistently continues to shine.

Outside of school, Chase has been an active member of the Headingley community where has volunteered for numerous events.  Chase hopes to wrap up his studies next year at Westwood and hopes to head off to medical school where he plans to be a dermatologist.

Let us all take a moment to celebrate Chase and all of his fantastic accomplishments. 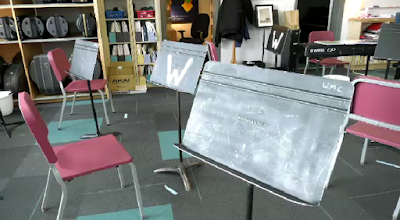 Published Monday, March 1, 2021 7:46PM CST
Last Updated Tuesday, March 2, 2021 7:01AM CST
Source: Scott Anderson
WINNIPEG -- The ban on playing wind instruments in school bands has left some kids hitting the drums, or nothing at all, as COVID-19 measures continue to make music classes a challenge for teachers.


In response a group of concerned parents is rallying to bring band class back to schools, wind instruments included, saying small groups should be allowed now.

“We can do it safely. We’ve toed the line, we’ve been very good for the last year. The kids have not played for a year and they miss it. There’s still a lot of parents paying for musical instruments,” said parent Melissa Davidson, who has two teenagers in band.

Davidson said since her kids haven’t be able to practice with a full quartet, their motivation to play is gone.

That has her concerned about the mental health of all students and the long-term impact of not being able to play together.

“It’s one ingredient of a bigger recipe, so you can do some scales, but you really can’t be part of that creative process by yourself,” Davidson said.

Dr. Brent Roussin, chief provincial public health officer, said when it comes to the resumption of band practices, public health orders don’t apply to schools in the same way, but they are part of a system that relies on public health advice.

"We know that certainly things like wind instruments, singing and things can increase risk of transmission. So we're working with this real cautious approach to try to ensure we can keep kids in school, to continue to open things up and as our numbers continue to decline that we'll be able to do more and more of this,” Roussin said.

However, executive director of the Manitoba Band Association, Chelsey Hiebert, said students would continue to wear masks, remain physically distanced and use bell covers over the end of instruments.

“There’s now extensive research that wasn’t available at the beginning of the shut down that shows there’s mitigations that can be put in place that can almost eliminate the risk od aerosol exchange in wind playing” Hiebert said.

“For a lot of these students and a lot of these children, as parents are noticing first hand, they’ve lost their entire social network. They’ve lost a way into which they participate with their peers and a way to just decompress and relax from other activities,” Hiebert said.

Ross Brownlee, a music teacher at Westgate Mennonite Collegiate, said the absent sound of the wind and brass instruments can be deafening.

“The wind and brass instruments, they have shape, they have melody, they’re pitched instruments. A bucket, well you can get four sounds out of a bucket,” Brownlee said.

In a statement to CTV News Education Minister Cliff Cullen said: “We know students have missed out learning and performing music which is an important part of education and well-being. We are currently consulting teachers and public health on this issue. We ask for the continued patience of students, teachers, and parents as we fight through this pandemic.”

Read the Article on line Here:

Just in time for the public health ban on band, an order of about 175 bell covers — essentially masks for wind instruments to limit the spread of aerosols through playing — arrived at Westgate Mennonite Collegiate.

Four months later, the equipment remains untouched amid the COVID-19 pandemic, much to the dismay of young musicians.

"I don’t think playing music is any more risky than anything else we’re doing in school," said Ross Brownlee, a music teacher at the private school in Winnipeg. "Band needs to restart. Choir needs to restart. We just need to do it really carefully, for perception and for the safety of our kids."

The province put a moratorium on the indoor use of wind instruments and choir when schools entered a restricted level on the pandemic response system; first, in Winnipeg at the end of October, and later, across the province.

Music teachers have moved classes outside and online, or they have focused on history and theory but Manitoba students, parents and teachers are calling for ensembles to resume in person with safety measures in place.

The issue is dear to families involved with the newly formed Manitoba band parent advocacy group, who signed an open letter to provincial ministers outlining their case.

"For many Manitoba students, these extreme restrictions have not only impaired their musical development, but also destroyed the centre of their social lives and sense of belonging at school," their letter states.

The nearly 30 signatories argue students should be allowed to play instruments indoors if they can play indoor sports.

Internet lag prevents Hepworth’s concert band class from being able to perform together, so instead, students listen to their teacher play exercises and scales and follow along, on mute, at home.

"When you’re in a band, you’re kind of like a team, so you’re all in it together and you can listen to people and blend and make something really amazing," said Hepworth, who attends Transcona Collegiate. "When you’re just on your own… a lot of motivation is gone."

Pre-COVID-19, there were 290 band programs in Manitoba. Many have been affected, owing to pandemic uncertainty and early reports of choral super-spreader events.

"Our message from Day 1 has been the same: safety is of the utmost importance to band students and every Manitoban. Now, we know that extensive research shows (band) can be safe," said Chelsey Hiebert, executive director of the Manitoba Band Association.

A University of Minnesota study published in the fall found that wind instruments typically do not spread aerosols farther than one foot.

This month, a McMaster University review of related research concluded there is no clear evidence of transmission associated with wind instruments, although it is theoretically possible.

Hiebert listed physical distancing, the use of slit masks and bell covers, and allowing time for rooms to breathe to make sure there’s enough air exchange in a space as ways to reduce risk.

"We know students have missed out on learning and performing music, which is an important part of education and well-being," Education Minister Cliff Cullen said in an emailed statement, adding Manitobans are asked to remain patient as the pandemic wears on.

"As a growing musician, I feel that I’ve lost a sense of purpose in my life. I can’t connect with others through a shared love and interest in making music together," said Skwarchuk, a senior at Vincent Massey Collegiate.

As Skwarchuk waits to hear whether she’s been accepted into post-secondary music programs, she said she’s nervous her skills will be rusty next year because of her limited ability to practise in a band at present.

Manitoba is considering allowing music facilities to open for individual instruction and limited capacity group classes as early as March 5.

Fitzhenry said she hopes that means there’s finally "a crack in the door" for the resumption of school band.

Welcome to the Westwood Band Program

WELCOME TO THE WESTWOOD COLLEGIATE BAND PROGRAM WEBSITE
WE'RE GLAD YOU'RE HERE
EVERYTHING YOU NEED IS AT YOUR FINGERTIPS - JUST CLICK ON THE LINKS BELOW
at January 29, 2021

With the province deep into the grips of COVID and all music making restricted in schools, we are changing the timetable to accurately reflect the needs of our program.

Kate and Brooke - Artists of the Month 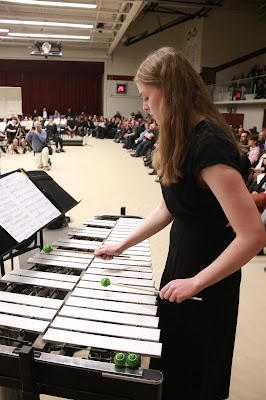 Band Students of the Month:

It is with unparalleled enthusiasm that we announce that Kate and Brooke have been named the band students of the month for December.  You may recognize these two outstanding young ladies from their athletic accomplishments: basketball, volleyball, hockey, rowing, badminton and just being all around wonderful athletes….  But, did you know about their dedication to another team… Symphonic Band and our top tier jazz ensemble - the Little Tykes Jazz Orchestra.

These two amazing young ladies have set themselves apart from the other musicians in our school through their willingness to tackle any part that is given to them.  “Good enough” is simply not in their vocabulary and they now have come together to form the backbone of the Symphonic Band percussion section.  Snare drum… no problem.  Play maracas in your left hand and castanets with your right… you betcha! 4 mallet vibes part… bring it on.  There is nothing that can stop these two from having a great time doing what they love!

The best part is the smile that they both seem to share when the parts come together after hours of hard work.  They both brighten up any room they enter. Brooke brings a light to the 7:10AM rehearsals for L.T.J.O. and her auxiliary percussion skills are unparalleled here at Westwood.  Just ask her to demonstrate her authentic Afro-Cuban Tumbao on congas if you want to see her in action. 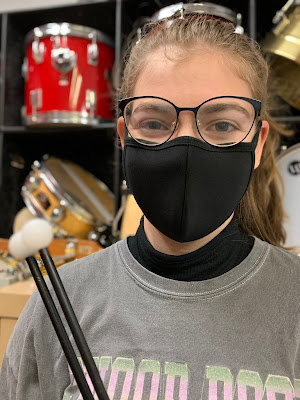 As for Kate, she is happiest when there is a percussive problem to be solved and you simply know that once she commits to solving it, you it will be spectacular and everyone will benefit from her awesomeness.

These two do not seek the limelight, but if you every want to see them at home, drop by a rehearsal sometime and you will find them both doing what the love best, and that’s sharing their love of music with whomever will listen. 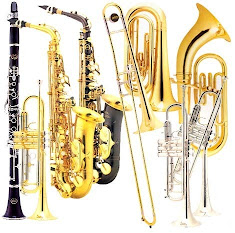 We have updated our renal fees today.  We held off a bit this year to give families some time to settle into their "new normal." Shortly you will be receiving a message from School Cash Online that you may have a rental fee or a percussion fee owing.  Please click on the link above for a detailed explanation.  If you have any questions, please do not hesitate to contact Mr. E.
at November 17, 2020

It is with great pleasure and joy that we acknowledge Chase as the March Artist of the Month for his outstanding contributions in the Band a...