This year, we will again be selling a band DVD, which will feature lots of movies and tons of photos from each performing ensemble in the Band Program and including every concert.  This way you do not have to tare at your loved one through a 2 inch screen and can enjoy the concert.  We have been compiling this information over the past year, and we cannot tell you how excited we are about this dynamic project.  This exciting keepsake can act as a supplement to your son’s or daughter’s yearbook (in fact it comes in a sticky backed case that can be attached to the back of your yearbook)  or act as a stand alone souvenir of the “too numerous to mention” accomplishments of the band program.  All orders must be pre-paid and no orders will be accepted after the 29th of May. A parent committee will be at the concert on the 28th to take your order.  The DVDs will be available for pick-up some time during the week of the 15th of June in the Band room.

Please copy and print the lower portion as an order form and bring it to the concertwith your cheque.

PLEASE MAKE ALL CHEQUES PAYABLE TO WESTWOOD BAND CD
Posted by Band At Westwood at 08:40


As we approach our final concerts for the year, I wanted to re-post our concert dates and rehearsal times.

All students are to be at the school at 6:00PM and we would like to take this moment to remind parents and students alike that this concert constitutes our final exam and all students are required to stay for the entire concert.

Rehearsal Schedule for May 28th:


Hope everyone is as excited as I am about the upcoming concerts.  Please do not forget that we now webcast all of our concerts so loved-ones from around the world can watch and listen to our concerts.  Please feel free to share this information with everyone from out of town who may want to tune in.
We apologize in advance for the ads.  We are considering upgrading to the pro version and that will get rid of them.  It is our intent to use this year's DVD revenue to purchase cameras and work towards a more professional feed.
So you can watch in two ways.  You can watch by clicking on this link: Westwood Live
and you can watch on any device anywhere in the world.  If that does not float your boat, you can watch live in the embedded window below.
Broadcast live streaming video on Ustream
Posted by Band At Westwood at 08:36

What can we say that has not already been said?  Westwood Collegiate Band and Choral programs are a force to be reckoned with.  From May 12th - 16th, 26 students, along with Mr. Edwards, Ms. Russell and Mr. Wake attended the Nationals Music Festival in Toronto.  Both Nationals Vocal Jazz and Sr. Jazz faced some fierce competition, as everyone at this festival had to win a invitation by competing at their regional festival first.  Thus, Musicfest is a coming together of the top vocal jazz and Jazz ensembles in our country.

When the dust had settled, both groups had risen to the top of their respective categories and we each awarded a GOLD plaque to honour their achievements.  Adjudicators were "over the top" with their compliments. 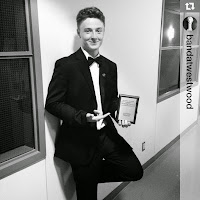 Christine Jensen who directs a big band in Montreal was verbally adjudicating the band and was,"all in!" for our performance. She complimented the ensemble on masterfully dealing with some very difficult textures.  In the end, she came on stage and told the ensemble that they were the "hippest band" of the entire festival and complimented Mr. Edwards on bringing such a dynamic band to the festival... "it was a musical treat." She then presented an "Honour Award" chosen by the adjudicators to Evan, drummer with the Sr Jazz, in recognition of his outstanding performance at the festival. 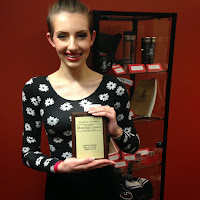 As for the vocal jazz ensemble, their audience rose to their feet in standing ovation..... which is not unheard of for this group, but what was absolutely phenomenal is that the ovation came after their expertly executed rendition of Pentatonix's Run To You mashed-up with Gravity...... THEIR 2ND TUNE.  An ovation after your 2nd song is unheard of, but we saw it happen with our very own eyes.  Greg Jasperse, member of the highly acclaimed Veritical Voices and educator at Western, worked with the vocal jazz after their performance and was absolutely on fire to have the chance to work with an ensemble of such high calibre.  He then recognized Lindsay with an "Honour Award"  chosen by the adjudicators in recognition of her outstanding performance at the festival.

After our performances, we were all over campus checking out: Concert Bands, String Orchestras, Concert Choirs and other Vocal Jazz Groups and Jazz Bands.  With everyone being at such a high level, it was no surprise that every performance we saw was fantastic.

On Thursday, the group was treated with a visit to the CN tower and to Ripley's aquarium.  I will let the photos speak for themselves on that one.  Epic vistas and "tiny purple fishes run laughing through your fingers and you want to take them with you to the heartland of the sun."  (Tale of Brave Ulyssyes - Cream).

Then we ended up at Chapers/ Indigo Bookstore where, through the genius vision of Ms. Russell, the Vocal Jazz ensemble was able to perform their a cappella set for none other than Heather Reismann the CEO, of Chapters/Indigo.  She was so impressed with the students from Westwood, that she told them all to pick any two things in the store at her expense.  Needless to say there were 26 kids wandering about Chapters with a crooked little grin on their face trying to decide what books to pick.

To wrap it all up the group spent all day Saturday at Canada's Wonderland where the weather was simply perfect at 26˚C and sunny.... a stark contrast to the 10CM of snow that was awaiting everyone on their arrival home.

What else can be said.  Fantastic teachers, wonderful principal and excellent students. ..... but we knew that already.

Sr. Jazz audition music is now available to anyone interested in auditioning for next year's Sr. Jazz.  Auditions will take place the 2nd week of June and you can download the mp3's off of our listening site.  See Mr. Edwards to pick up your music and feel free to drop by if you have any questions.
Posted by Band At Westwood at 08:32

Auditions will be accepted in the following ways:
• In-school live-recording sessions held by a MHJB representative. Please contact Richard Gillis at Richard.Gillis@umanitoba.ca if you have 4 or more students who are interested in a live-recorded audition and we are happy to schedule an in-school session at your school.
• Online submission at www.winnipegjazzorchestra.com/mhjb
• Physical submission to: 121 Cathedral Avenue, Winnipeg, MB  R2W 0W7 (must be received by deadline).

Please encourage your students to audition for this exciting opportunity!