WESTWOOD BANDS in the Spring edition of the St. James-Assiniboia school Division CONTACT

Three perfect scores from judges, a clean sweep for all Jazz Bands and the prestigious Don Green Award gave Westwood Collegiate many reasons to celebrate after the Optimist Festival this year.
At the 2018 Optimist Band Festival, all seven ensembles from Westwood Collegiate were invit-
ed to represent Manitoba at Nationals 2018. The Symphonic Grade 11 and 12 Concert Band received Superior, as well as a perfect score from one of three adjudicators. The four Westwood Collegiate Jazz Bands experienced a clean sweep, all earning Superior. The Senior Jazz earned two perfect scores from both of the adjudicators honouring the 25 students in this advanced category. Lastly, the school was selected to receive the Don Green Award.

The Don Green Award recognizes the top pro- gram out of more than 170 participating ensembles. It re ects a combination of exemplary performance, mature on-and-off stage presence, responsiveness to clinics, commitment to the festival through lon- gevity and the overall development of an outstand- ing band program.

Chair of the Optimist Festival Robert Clark men- tioned how Don Green was an active member of the St. James-Assiniboia community. He was part of the Assiniboine Optimist Club, the St. James Chapter, founded the Crestview men’s fastball league and Crestview Community Centre, and helped launch the festival 43 years ago in 1975 when only a hand- ful of schools were involved. Westwood Collegiate being one of them.

Westwood Band director Mr. Edwards re ected on the history of the band program at Westwood and attributed the groups recent successes to all those who helped build it.

“It’s a circle of inspiration,” said Mr. Edwards. “This particular year has clicked something erce, these guys are self-motivating, self-actualizing, its numer- acy and literacy and just everything you could ever want a student to be involved in.”

The talent and commitment of the students attribut- ed to the Don Green Award, as did the fact that for 12 years Westwood has been volunteering to clean up after the festival. This involves all hands on deck and approximately six hours of teamwork. “That’s participation and being part of that community,” said Clarke. “That went into the decision making as well.” 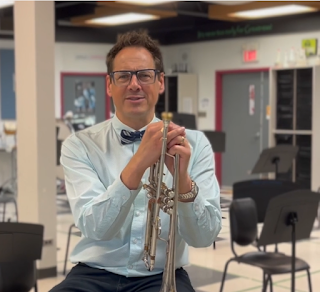