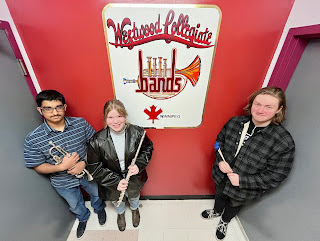 Recently, there has been a whirlwind of excitement in the band program as three of our members have been named to represent Westwood Collegiate at the Provincial and at the National level.

Rachel Tarrant is a Gr. 10 flautist who plays in both the Gr. 10 concert band and the Symphonic band at Westwood Collegiate.  She is actively involved in all things music and is also a fine Tenor and Bari sax player.  Besides her band prowess, she loves musical theatre and loves to sing as she is a member of the Sr. Divisional Choir.  Next, you can catch Rachel on stage as she is playing Ursula in the upcoming production of Little Mermaid at Westwood from May 18 – 20.

Tim Franklin is a  Gr. 10 student at Westwood Collegiate who is a percussion specialist.  Although his passion is drum set, he has worked very hard on his mallet playing and has now fallen in love with all things mallets.  To round out his percussion awesomeness, Tim is also a fine timpani player.  His kind and approachable manner allow all the members of his section to feel that they can come to him for help, regardless of their instrument. As a result, it is no big surprise that Tim was named as section leader.

Rachel Tarrant is also a member of this ensemble.

Nathan Varghese is an exceptional gr. 12 trumpet player who is truly at home in the band room at Westwood Collegiate.  He is involved in numerous ensembles.  At Westwood is the section leader for the trumpet section and is also the lead trumpet in jazz band.  Outside of school, Nathan can be found often performing on Sundays at church.   Nathan is a kind and generous student whose passions helped him and the rest of the members of the Westwood Historical Society produce a documentary about Holocaust survivors here in Winnipeg that will be debuting later this year.

Nathan Varghese worked very hard this year preparing his audition for the National Youth band of Canada, and we were all very happy when Nathan was selected as a member of this prestigious ensemble. Nathan is looking forward to flying out to Toronto and spending a week working with renowned conductor Dr. Darrin Oehlerking and meeting up with students from all across the country to perform at a sold-out concert at York University later this spring.